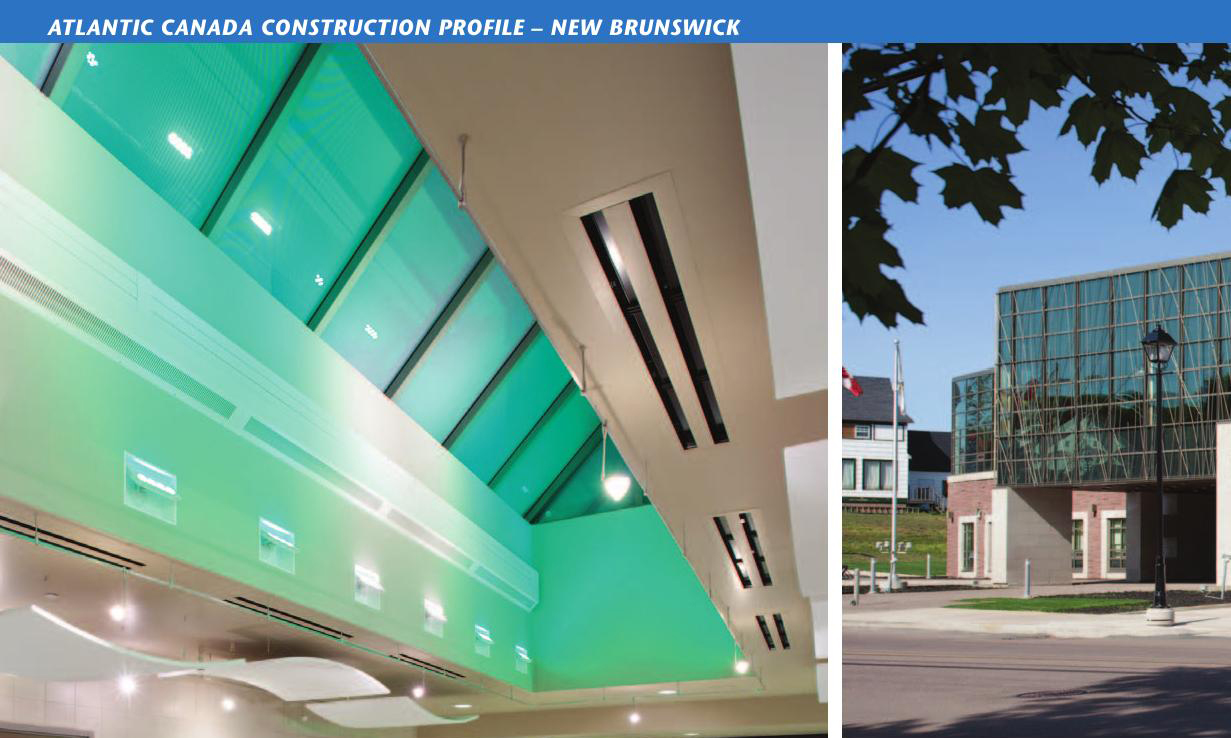 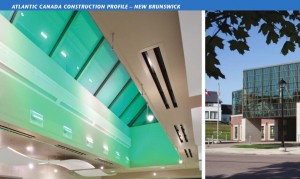 Architecture 2000 Inc. president Raven Spanier says his company has designed several other town halls in the region. Sackville, with a population of about 5,500, has a strong cultural tradition, receiving recognition in 2008 from Heritage Canada as ‘a cultural capital of Canada.’

“The town has very traditional architecture for the most part but the residents of Sackville, a town which is very rich in cultural arts, were very welcoming of this modern and contemporary work,” says Spanier.

The building is one of the first in the area to achieve LEED Silver status and is an inspiration for others, he says. “The project uses local cladding materials, reclaimed water for washing the vehicles, geothermal, in-floor radiant heat, abundant interior light through skylights; and solar hot water panels.”

Spanier says the building is constructed from local sandstone and is designed with a literal policy of government transparency. Council chambers are at the building’s front upper level, creating a covered entrance and outdoor art gallery below. “There is a multi-purpose council chamber space with a moveable wall, which will be available for public use and an ability to extend the upper sky-lit lobby” he said.

One of the project’s biggest challenges, according to Spanier, has been marrying public use with emergency services. “There was a balancing to be achieved between stringent security requirements and a welcoming public space for their use and access. We chose materials that distinguish each mass while connecting them to create a whole building.”

Spanier says the glass wall which brings in natural light also introduces a decorative art feature to the building. “The glass wall didn’t have to be fully open to bring in the light we wanted so we took inspiration from local marshes featuring reeds through fashioned reeds of aluminum rods creating a decorative screen,” he said. “The reeds sit in frames to keep them away from the glass and are situated in two vertical planes for a more natural look.”

The glass is self-cleaning and covered with a film to remove residue.

Spanier says the centrally-located facility will be a big part of the community with public spaces and artistic attractions. “There was a public art competition to bring art into all parts of the building so it has a bit of a gallery atmosphere,” he said. “There is a ground floor gallery in the lobby space which will display local artists and people will be drawn by the public art outside. Once complete, the green roof will also become a public use space.”

Spanier says his practice has learned how to do more with less, working within the restrained maritime-province budgets. “We’re starting to see more resources and specialties in our built environment. There is a need to build economically and sustainably, which requires innovation and creativity,” he said.