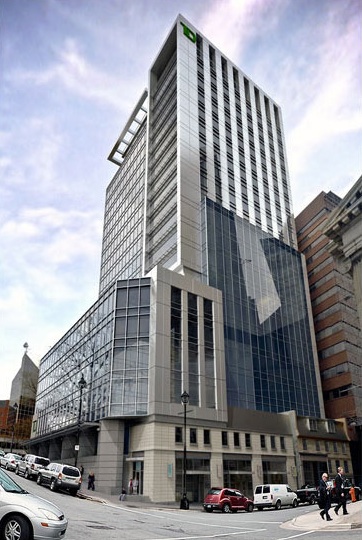 TDB Halifax Holdings Limited has announced that it has signed a new 10-year lease renewal with TD Bank Group at the new TD Centre Halifax redevelopment (corner Barrington and George Streets), and the bank will continue to be the building’s namesake anchor tenant.

Construction for the redeveloped TD Centre Halifax is projected to be complete in 2014. Companies and organizations wishing to learn more about possible tenancy are invited to contact Chris Andrea, vice-president and general manager, Compass Commercial Realty, at 902-454-1234.

Designed by Lydon Lynch Architects, the project received unanimous approvals from the HRM Heritage Advisory and Design Review committees in 2011, and aims to attain a LEED Gold, core and shell (CS), certification making it the largest and newest Class A Smart Building in Halifax when construction ends in 2014.

About the Thiel family and TDB Halifax Holdings

Originally from Trier, Germany, the Thiel family became interested in Nova Scotia’s commercial opportunities following a family vacation. In 2000 they built a beautiful log home in Shelburne County and their frequent visits deepened their appreciation of the province, its natural beauty and the people who live here. Soon Günter Thiel led his family in looking for opportunities to invest in Nova Scotia’s future.

By 2003 the Thiels owned several iconic commercial buildings including the Royal Bank Tower, the BMO Tower and the TD Centre. TDB Halifax Holdings Limited is a Thiel-family company that owns the TD Centre. Their vision is to develop these buildings and the surrounding downtown blocks to their full potential.

The Thiels have since brought their passion for art to the province, making several generous contributions to the Art Gallery of Nova Scotia. Günter has been recognized by the AGNS’ Honourary Governor for his exceptional support of the AGNS, the community and the province. Wolfgang Thiel is a TDB Halifax Holdings director and is overseeing the TD Centre expansion and renovation.