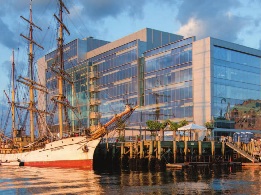 An under-utilized power generating plant constructed in the 1940’s has been transformed into the Atlantic Canada’s first  LEED Platinum facility, reflecting the building’s history.  The project will reconnect Halifax’s downtown to the waterfront and will serve as Nova Scotia Power’s (NSPI) new corporate headquarters.

WZMH Architects partnerCarl Blanchaer says the vision for the $53.4 million building came during the initial bidding phase. “Nova Scotia Power was committed to a highly sustainable vision and we were able to come up with a design that achieved that, but also made a civic contribution to the city and contributed in a positive way to greater collaboration and staff interaction,” he said. “We’ve already heard from the user that this goal has been achieved.”

Originally constructed of steel and concrete and resembling something like a bunker, the building had created a barrier between the city and the waterfront. Part of the idea for a civic contribution included opening up the space to renew the connection. “We added a 14 metre, six-storey atrium which acts as the heart of the building, bringing light and airiness to the space, provides a gathering place for staff, and also provides a gateway between the city and the water,” explains Blanchaer.

The building has been designed to capture as much natural light as possible.A galleria six metres wide runs the length of the building, varying in height from two to five storeys, and skylights bring in even more light.

“We were able to keep several key elements of the original building to maintain a memory of what had been there,” Blanchaer said. “One of these is the wonderful steel structure that is visible in the atrium and the other is the original chimneys. We used the base of these to install skylights so they gain added function but the shape and essence of what they were originally remains.”

WZMH principal Harrison Chan explains some of the other elements of the new design, which helped the building achieve its LEED Platinum certification.

“The initial design strategy from both an aesthetic and sustainability approach was to maintain the original interior steel frame structure and exterior concrete shell as much as possible,” he said.   “In order to  maximize daylight into the building the exterior concrete walls were cut strategically to add many windows on all elevations.  In addition, we implemented  simple but effective measures such as reflective white roofing, daylight sensors, raised  flooring in the office for flexibility of function and layout, polished concrete floors, a minimal but sustainable material palette (steel, glass, and wood), and used some unique systems to achieve high energy efficiency.”

Among these is a sea water cooling system, drawing water from pipes deep in the adjacent waterway, and a chilled beam technology, originally used in Europe, integrated here with modern-day heat exchangers. This innovation “uses water passing through small pipes carrying greater capacity to cool the space via induction units located throughout the ceiling,” Chan said. “It is far more efficient and quieter than any in-ceiling fan system.”
“There is also rainwater collection and recycling for use in the building.  Design estimates have the building achieving substantial energy and water savings, and NSPI is in the process of evaluating the building’s performance.”

The building has already been honoured by the Canadian Green Building Council as the first Atlantic Canada building to receive LEED Platinum certification. It has also been recognized with the Lieutenant Governor’s Award for Excellence in Engineering, and from the Association of Registered Interior Designers of Ontario (ARIDO), Awards of Merit in two categories: Restoration and Adaptive Reuse, and Restoration and Adaptive Reuse – Sustainable.