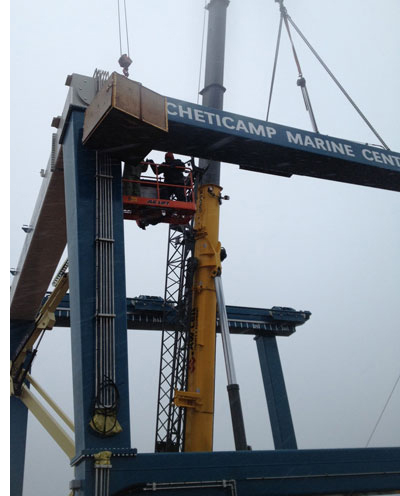 Construction of a $5 million marina and boatyard is underway in Cheticamp, Nova Scotia, reports CBC News.

The new marina will also feature the largest marine travel lift in Atlantic Canada, according to news report. To give fishermen an alternative, Raymond Devau, the businessman behind the project, has put millions of dollars into turning 26 hectares of land into a boatyard and marina.There will be room to store 500 boats at the site.

“The cornerstone of the project is the huge marine travel lift and two wharves,” Deveau is quoted as saying on the marina’s website. “You can imagine the investment involved. The travel lift alone is close to a million dollars. But because of the investment in land and equipment, large vessels from around the world will sail into Chéticamp, be safely lifted out of the water, and repaired or stored for an indefinite period of time.”

Raymond Deveau’s continuing involvement in the fishing industry has made him a creator of jobs for those calling Cape Breton home. Pêcheries Chéticamp (Chéticamp Fisheries), which processes and exports snow crab around the world, is just one of a growing number of Atlantic Canada business enterprises headed up by the Acadian entrepreneur. Deveau also owns Dynasty Development Group which builds quality homes across Nova Scotia.