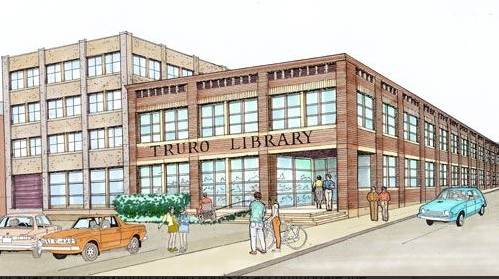 Truro Daily News reports that an architectural design provided in a proposal for a new Truro (Nova Scotia) library was “intentionally” light on detail so that it could be customized to the final user needs, a developer says.

“We intentionally didn’t give it too much detail,” said Leo Rovers of L&R Construction Ltd., one of two companies in the running for the development of a new Colchester East Hants Public Library.

In a story published in the Aug. 12 issue of Truro Daily News, however, library director Janet Pelley said her board is in favour of the hat factory plan proposal in part because that plan provides more useable floor space and better parking.

And while both plans have merit, Pelley said, “there is not enough detailed information in the Normal College proposal.”

Brian MacKay-Lyons, president of the MacKay-Lyons Sweetapple firm, said he would welcome an opportunity to meet with the board to discuss its specific needs for a new facility.

“We want to have the opportunity to get back to the table with the library users and customize it to their needs more specifically,” he said.

“And that is not just an excuse for not detailing it more. We really believe that that is the right way to do it and the difficulty with a developer proposal call, such as this one, is it doesn’t start with the user input. It doesn’t start with the architects and the users getting together to figure out exactly how the space should work.”

MacKay-Lyons described the Normal College as an “incredibly robust and flexible” building that would easily meet the library’s needs.

“That building and an addition that we’re proposing should easily be able to accommodate their goals, we think,” he said. “It’s a great building … it’s a very robust building and if somebody doesn’t put a legitimate core and public use like that in it soon, it won’t be. It’s still in great shape.”

The cost to refurbish either building is estimated at approximately $7 million and MacKay-Lyons said that, contrary to earlier reports, that figure does include installing an elevator.