HALIFAX (September 24, 2013) – Downtown Halifax property owners and developers, the Thiel family, today unveiled plans that will transform a downtown city block into a boutique hotel, condominiums, restaurant, office, retail, and public spaces with underground parking – all unified by an ambitious mobius-strip-inspired ribbon wall that meanders its way through the development, bringing together each component under a single architectural identity.

The 500,000 square-foot, twin-tower development will span the area bounded by Granville, George, Hollis and Duke streets in the heart of downtown Halifax. 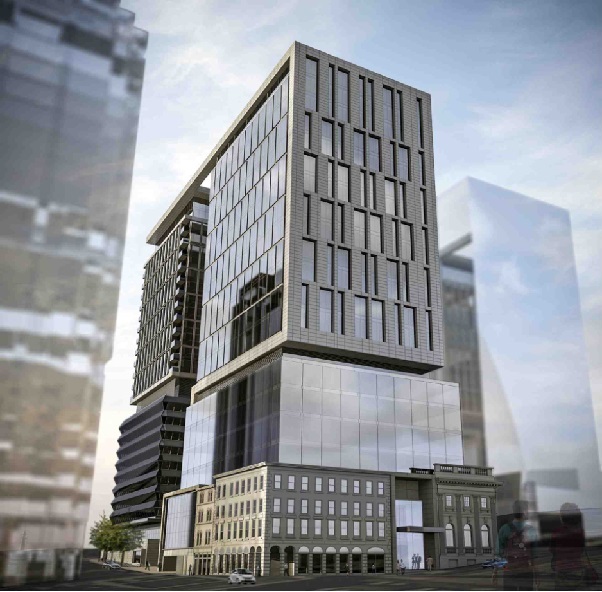 “My family and I feel an obligation to do something exceptional and long-lasting for Halifax with this large property – an entire downtown city block – and we believe that Lydon Lynch has done just that with this beautiful, twin-tower design,” said Wolfgang Thiel, president of Robin Halifax Holdings Ltd., the Thiel family-owned company that owns the current Royal Bank Tower and the block on which it stands.

The name, 22nd Commerce Square, hearkens back to the Canadian Bank of Commerce, the original name of the block’s historic Merrill Lynch Building, built in 1906, a precursor to the Canadian Imperial Bank of Commerce. The “22nd” reference is a nod to the next century and the Thiels’ commitment to creating lasting, exceptional buildings of enduring quality, design aesthetic and long-term value.

“Great architecture is the result of great clients, and the Thiels’ commitment to high-quality, legacy developments has motivated all of us to raise our game,” said lead architect Eugene Pieczonka, a principal at Halifax-based Lydon Lynch.

The 500,000 square-foot development will feature:

Density is a key factor in both the growth of cities, the happiness of cities, and the wealth of nations. And cities and regions where density is more concentrated near their urban cores — appear to gain the biggest economic advantage.

As the LEED® Gold certification has risen to become the standard expectation for new building construction in markets around the world, the Platinum designation is the highest LEED® rating achievable.

As part of their commitment to a vibrant downtown Halifax, the Thiel family is investing significantly to ensure 22nd Commerce Square achieves LEED® Platinum (Core and Shell) certification so it will deliver some of the highest energy, environmental and social benefits available to its occupants and the surrounding downtown Halifax community.

“In addition to our ambitious design objective, our goal of securing LEED Platinum Core and Shell certification will see us reduce the entire block’s environmental footprint while increasing downtown density and creating healthier living and working environments,” added Pieczonka.

When complete, 22nd Commerce Square will incorporate many environmental and energy-saving features and their corresponding benefits that will make rents very competitive:

–      A heat-recovery system that draws energy from sewage waste

–      Photovoltaic panels on the hotel facade to generate electricity

–      Rain water collection system to reduce the building’s demand on the city water supply, and serve such non-potable uses as toilets, landscape irrigation and the cooling tower

Preparing the site: preservation and demolition

The entire block will be vacated and the Royal Bank building and some others will be demolished completely. The block currently houses five buildings that are registered as “heritage” under the Municipal Registry of Heritage Properties: the Bank of Commerce, Hayes Insurance, Merchant’s Bank of Canada, Champlain and Flinn buildings.

The main Bank of Commerce Building will be retained intact and efforts will be made to retain the main banking hall’s delicate interior finishes. The bank’s lower extension façade will also be retained. The interiors of the remaining four buildings will be demolished with their facades stabilized, restored and incorporated into the new development as part of the block’s overall streetscape design.

The redevelopment will celebrate the block’s architectural past and future:

·     The delicate, glazed, white-terra-cotta tiles on the façade of the Merchant’s Bank of Canada Building on Granville Street will be fully restored including significant replacement due to deterioration

·     The Champlain Building will regain its original, large, street-level arched windows and receive a new corner entrance at Duke and Hollis streets – a good idea that was originally proposed in 1911, but never implemented.

About the Thiel family and Robin Halifax Holdings Ltd.

Originally from the German city of Trier, the Thiel family has diverse economic interests in Nova Scotia such as forest management, beverage production (www.solmate.lu), and several iconic commercial buildings in downtown Halifax including the current Royal Bank Tower, the BMO Tower, and the TD Centre. Robin Halifax Holdings Limited is a Thiel-family company that owns the current Royal Bank Tower and the block on which it stands. The family’s vision is to develop these holdings to their full potential. Wolfgang Thiel heads various Thiel-family-owned subsidiaries in Halifax, and is overseeing projects such as the TD Centre expansion and renovation, and the 22nd Commerce Square development.